Oman Human Rights Commission (OHRC) has observed a report
published by the Sunday Mail newspaper of Zimbabwe in relation to
Zimbabwean women and a Dutch Organization Do Bold report in relation
to Sierra Leon women who arrived in Oman as domestic workers.
Such reports stated that these workers were subjected to difficult working and living conditions, and could be considered victims of human trafficking as defined by the United Nations, and were subjected to fraud, physical and sexual violence, as well as forced labor conditions.
Once OHRC received the case, it started investigation process in coordination with Ministry of labor and Royal Oman Police. As a result, OHRC revealed that some Zimbabwean women are deceived usually by the recruitment agencies in their countries. They were deceived about the nature of the job, the salary, and the place of stay. Some of them tried to flee their employer after they had discovered that the recruitment agencies in their countries have deceived them- as published by the newspaper.
To secure the rights of such maids, OHRC believes that they should have filed their complaints to the relevant authorities in Oman as per the laws and regulations. They should have reported any violation to the airport officers and submitted documents or evidences that prove that they have been subject to any abuse. This is their right as per the Omani laws and regulations.
As for their physical health, OHRC would like to point out that the Omani police; judiciary and other relevant organizations handle the physical and sexual abuse cases as per the provisions of the Omani Penal Code. As per this law, everyone should receive decent treatment that maintains his/her dignity and preserve his/her rights.
With regards to the low salary as mentioned in the reports of the Sunday Mail newspaper of the UK and Do Bold organization, it should be noted that these salaries are decided by the foreign embassies of these maids. An agreement is signed between the employer and the employee voluntarily.
As for the allegation that the woman had their passports confiscated on arrival, it should be noted that the employer might not take the passport of the employee without his approval. As per the Ministry of Labor Circular in 2006, “The employer may not confiscate the passport of the employee without his/her approval or without permission from the Court. This is to maintain the right of the employee to maintain his/her passport. If any violation is made, the employee may report such violation to Royal Oman Police, the Ministry of Labor, and other relevant authorities.
As for the allegation that they were forced to see out their two-year employment contracts in spite of poor working conditions, denial of adequate food and health care, OHRC would like to point out that the Ministry of Labor Decision No 189/2044 about the conditions for the employment of maids states that ‘the agreement between the employer and the maid should be in writing. It should specify the rights and obligations of both parties including the salary, vacation and food. If the employer failed to honor his obligation, the maid may report such violations of the competent authorities.
It should be noted that the Decision mandated the employer to provide free-of charge food, healthcare, and return ticket to the maid at the termination of the employment contract.
The Labor Law provides maids with rest periods during the day in addition to monthly day-offs- as per the employment contract terms.
Article 3 of the Omani Labor Law 35/2003 banned all forms of forced labor. Oman has also ratified Convention No. 29 on Forced Labor and Convention No. 105 about Elimination of Forced Labor. OHRC has not received any complaints about forced labor.
Any labor or maid may submit a complaint by visiting the Ministry of labor or the Settlements Committee at the Ministry. If the complaint is not settled within two weeks at the Labor Welfare Directorate or the Settlements Committee, the relevant department shall refer the case to the Labor Circuit at the Court within not more than two weeks from the expiry of the said period.
The human trafficking combat system in the Sultanate of Oman has in place quick response measures by Royal Oman Police and Human Trafficking Combat Committee. There are many agencies that provide protection, accommodation, food, health care and legal assistance to workers in distress. There is also a hotline to receive human trafficking complaints.
As for the cases at which housemaids may be victims of human trafficking, it should be noted that housemaids who may be victims to human trafficking or being forced to carry out illegal works can report such violations to National Committee for Combatting Human Trafficking through its Toll Free number that operates round the clock.
The Committee maintains coordination with the Ministry of Social Development to provide human trafficking victims with accommodation (Dar Al Wifaq), legal assistance, health care and psychological support until the case is settled and the complainant receives her equitable rights.
Despite that, Oman Human Rights Commission cannot be certain that there are no legal or humanitarian abuses against these workers or others in Oman. This is the case in most countries of the world due to daily interaction between people. This can sometimes result in the infringement of the rights of both the employee and the employer.

However, this can be addressed by resorting to the competent authorities, and through the available means of reporting, filing complaints, and requesting legal protection, which Oman Human Rights Commission believes is available and guaranteed in the Sultanate of Oman.
OHRC affirms that Omanis and non- Omanis who may need to report any violation of inhumane treatment may report the same through the Toll-Free number: 1970, WhatsApp Number 72221966 website www.ohrc.om or through OHRC Twitter account @ohrc_oman.
Last but not least, OHRC welcomes any reports or information from any external party or organization on any issues in the field of human rights in the Sultanate of Oman in order to find out their circumstances and help solve them and provide the requesting party with any information about them 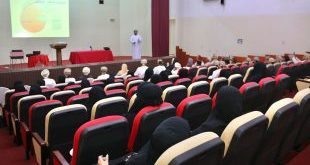